Which mountains should you conquer with your road bike? 8 bucket list climbs

Ask any random passionate cyclist which mountain you really need to climb and you’ll get the most diverse range of answers. From the known classics to obscure Italian monsters. We listed 8 bucket list climbs for you in this blog. Such a list is far from complete of course, but you have to start with your bucket list somewhere…

The first mountain on this bucket list is the Mont Ventoux. Even non-cyclists know about this mountain. The mountain’s nickname “Barren Mountain” is due to the fact that the last bit of the climb is above the tree line.

The length of the climb, together with the gradient make this mountain a real tormentor. It won’t get extremely steep, but the climb doesn’t level out anywhere either. The Ventoux slowly demolishes you and will give many cyclists a hard time climbing.

Not to mention the ever-present wind. Sometimes the wind is so strong that the Ventoux is closed. You can enjoy over 21 km of climbing the Ventoux with an average gradient of 7.5%.

The Alpe d’Huez is a really famous name for many Dutch people. First of all, the Dutch won some nice victories in the Tour de France. Additionally, the Alpe d’Huez is, just like the Ventoux, one of the most popular challenges for Dutch road cyclists. 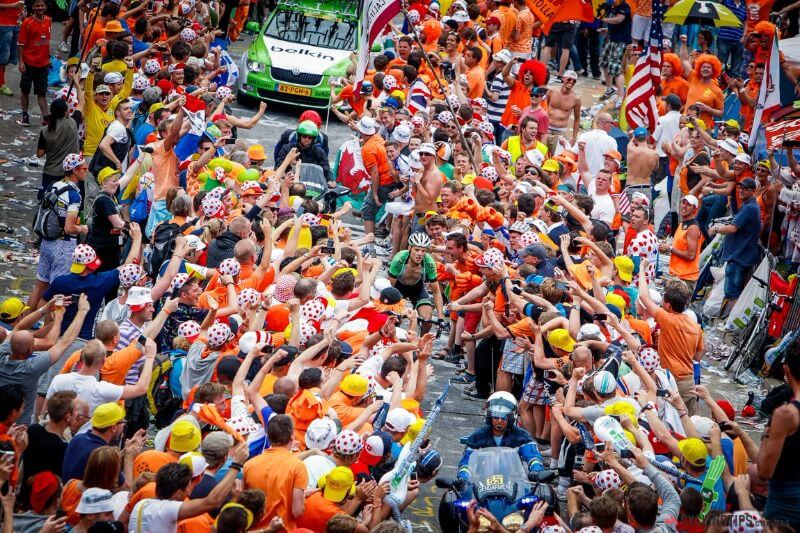 The Alpe d’Huez counts 21 hairpin bends and might be the most popular climb of all. The real die-hards go up and down the mountain about 6 times in one day for charity.

Kill two birds with one stone: the Telegraphe and the Col du Galibier

By name, these are two mountains. But if you’re there already, you might as well do both at the same time because they fit together perfectly. The Telegraphe could actually be seen as the predecessor to the Col du Galibier.

Between these two climbs there is a short descent of 2 km. But if you consider that the average gradient is 6% over more than 31 km, then you know that it is going to be a long road of suffering.

The most beautiful view from the Stelvio

The Stelvio is a climb that is not only very beautiful and quite tough, it is mainly known for the extremely beautiful view from the top. But before you get there, you first have to climb almost 23 km with a gradient of 8%.

A long and tough one: the Col de la Madeleine

One cyclist might benefit from the even surface, for others it could be wrecking. Starting off slowly and preventing overexertion is key to conquer the Madeleine.

The Tourmalet is an iconic climb in the Pyrenees. This one really should not be missing on our list of bucket list climbs. You would not think so, but the Tourmalet is the most climbed mountain of the Tour de France.

Nearly 17 kilometres of suffering with an average gradient of almost 8%. It may not sound so grueling, but the climb is getting steeper and steeper the closer you get to the mountaintop. So it’s extremely strenuous.

Whether this mountain belongs on this bucket list is something you can decide for yourself. Because the Scanuppia is a real monster. The toughest, most difficult and dangerous climb of all.

Not really the type of mountain you’d go for a ride on with your compact bike. In fact, officially you’re not even allowed to cycle on the Scanuppia. And if you made it to the top, a nerve-racking descent awaits you.

You know, give it a try to cycle up these gradients in the other direction and even disc brakes will fall short. This last mountain on our bucket list is one only the real fanatics dare to climb.

This selection of challenging, stunning or grueling climbs is of course only a selection of the many places where you could cycle. For an overview of worldwide climbs you can have a look here climbbybike.com.

There you will not only find as good as all climbs, but you will also get a good insight into how tough and how beautiful each climb is. So you can finally prepare your holiday plans for next summer.

You can find me on a bicycle almost every day. I commute each day from my house to work and back. Often on my road bike, and during the winter on an old crosser. And if that isn't enough, you can find me on my bike during most weekends too. On my trusty road bike or my mountainbike. And if you can't find me outdoors riding my bike, odds are I might be riding on Zwift

One thought on “Which mountains should you conquer with your road bike? 8 bucket list climbs”

Unfortunately, it happens to the best of us: a bike crash. Often (and hopefully), the damage is limited to a … END_OF_DOCUMENT_TOKEN_TO_BE_REPLACED

When choosing a new mountain bike, you are also able to decide what groupset you’d like on your new MTB. … END_OF_DOCUMENT_TOKEN_TO_BE_REPLACED

Does clipping in and out no longer go smoothly with your cycling shoes? Or do your shoes constantly slip off … END_OF_DOCUMENT_TOKEN_TO_BE_REPLACED

It’s high time to set out on your bike. Touring season has finally begun. As with all things, well begun … END_OF_DOCUMENT_TOKEN_TO_BE_REPLACED

Bicycles with belt drive are increasingly common. The advantages of a belt drive bike convince many cyclists to choose a … END_OF_DOCUMENT_TOKEN_TO_BE_REPLACED

Cycling is a lot of fun. That’s something we can all agree on. But there are days, weeks, or even … END_OF_DOCUMENT_TOKEN_TO_BE_REPLACED

The correct saddle height and saddle position are essential for enjoyable and injury free rides on your road bike. But … END_OF_DOCUMENT_TOKEN_TO_BE_REPLACED

Want to convert your 26 inch MTB to a 27.6 inch? That’s a job you can easily do yourself. Converting … END_OF_DOCUMENT_TOKEN_TO_BE_REPLACED