One of the keywords of the 2015-2016 season? Aero. Over the last few years, many items on and around the bike have been given the “aero-treatment”, eeking out marginal gains wherever possible which, when put together, amount to quite sizable savings! Bontrager -Trek’s component sister-company- has turned its attention to their helmets and came up with this: the Bontrager Ballista. 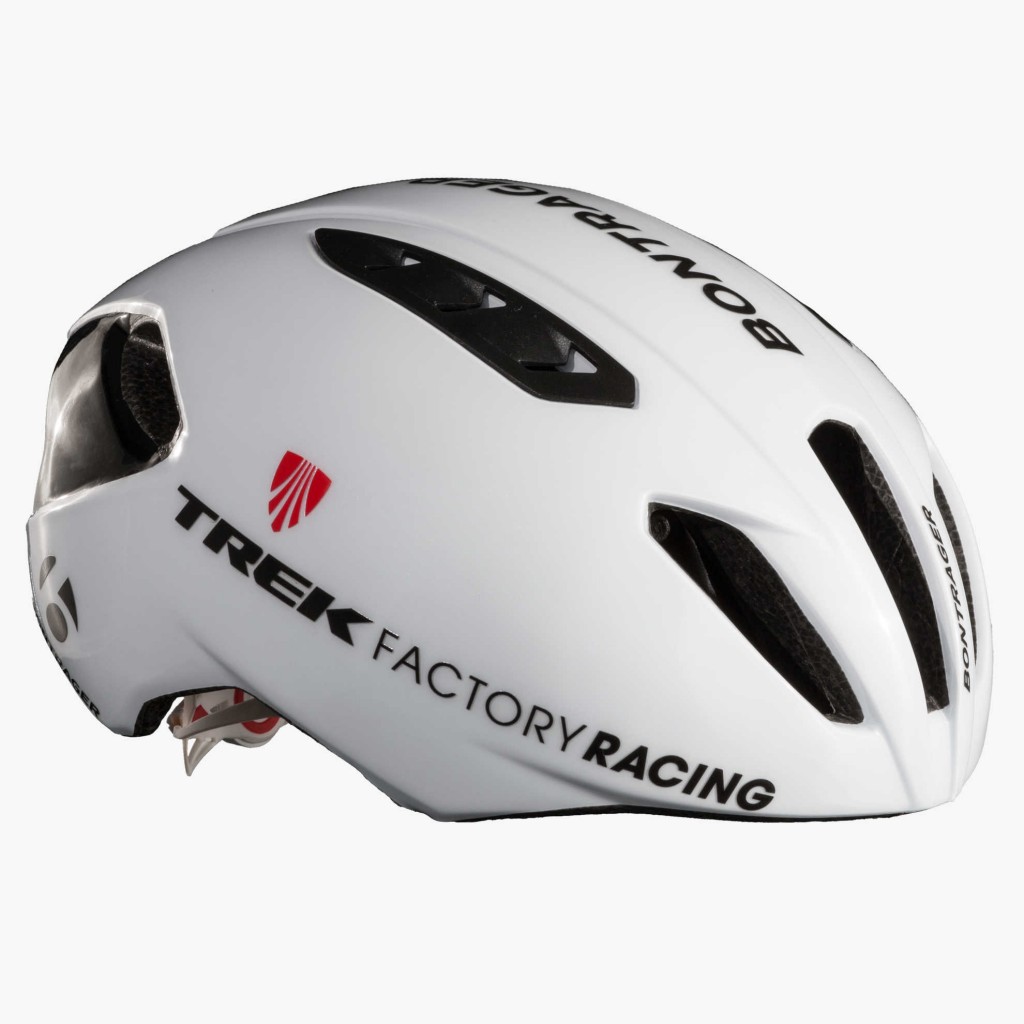 Named after a Greek catapult, the Ballista has been designed to propel you to victory. Aero helmets often mean compromise: more speed, but less comfort due to a lack of vents and a heavier design. Bontrager however claims they’ve cracked the perfect trinity with the Ballista: aero, well-ventilated, and lightweight.

Taking care of the ventilation are three large openings on the front of the helmet, which is where the aerodynamic pressure is at its highest: the wind hits the front first. The air is then channeled through the helmet and partially vented out of two sleek slots on the top of the helmet. The remaining air flows all the way through to the back and out via six additional exhaust ports. Riding behind the Ballista is vaguely reminiscent of looking at the back of a miniature high-end sports car; it looks striking, fast, and sleek. According to Bontrager, the large apertures on the front have been designed to allow the air to move both through and around the helmet, rather than pushing it all into the helmet where it has nowhere to go, which creates the turbulence found in the many openings of a regular helmet. Many of the test-riders, including the pro’s of the Trek Factory Racing Team, have reported a noticeable airflow around their head keeping them cool both at speed and while climbing. 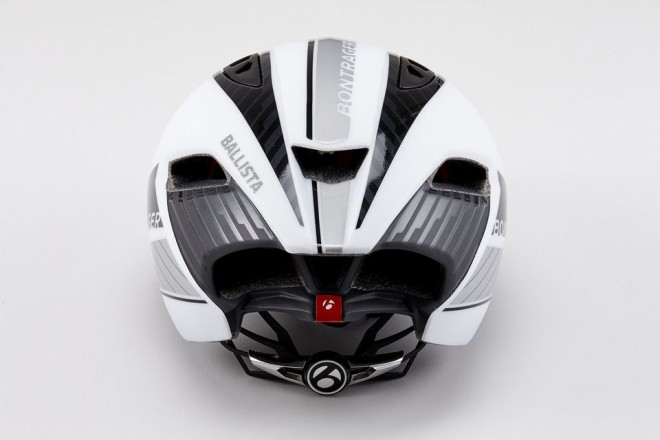 The aerodynamics don’t just make it a fast helmet, but a comfortable one too! Further aiding comfort is the relatively low weight: 266 grams for a medium size helmet. While there are lighter helmets available, 266 grams is a respectable figure for a full-on aero helmet. The Headmaster II system allows you to adjust the fit of the Ballista single-handedly, making it easy to tune on the go. The antibacterial AgION padding further increases wearer comfort and prevents any unpleasant odours by effectively moving the sweat away from your skin, allowing it to evaporate, thus keeping you feeling fresh.

The aero looks of the Ballista might be somewhat divisive, as is the case with many aero helmets: some love them- others won’t ever be seen going near them. Whatever you may think of the Bontrager Ballista, it’s safe to say it does stand out in a crowd. The sleek lines, striking rear profile and somewhat elongated look all give it a unique identity. Finishing off the Ballista is Bontrager’s crash replacement guarantee: if you’re unfortunate enough to put the Ballista’s safety features to the test during the first year of ownership, Bontrager will replace the helmet for you free of charge. The Bontrager Ballista then: it’s sleek, it’s streamlined, it stands out, but most of all -and what we truly want in a helmet: it’s safe.

My heart stilll lies with my boat, though it's forever being tugged at by the bike. I spend most of my time on or around the water, either as a rower or a coach. However, I'm always up for a blast around the countryside after work with my colleagues! Proud owner of a Giant TCR Composite, and addicted to upgrading it...

Cyclists in the market for a new mountainbike need to pick a suitable groupset to go with it. The large … END_OF_DOCUMENT_TOKEN_TO_BE_REPLACED

When I just started cycling enthusiastically I was still cycling in a cotton t-shirt, without a base layer. An undershirt, … END_OF_DOCUMENT_TOKEN_TO_BE_REPLACED

A cycling jersey is an essential part of your set of cycling clothing. The differences in quality and price can … END_OF_DOCUMENT_TOKEN_TO_BE_REPLACED

What do you do when you have a few days off and you like to go on long bike rides? … END_OF_DOCUMENT_TOKEN_TO_BE_REPLACED

All of a sudden, the Continental Grand Prix 5000 appeared on stage. Continental recently released the successor to the GP … END_OF_DOCUMENT_TOKEN_TO_BE_REPLACED

The Sigma brand might not be synonymous with high-end GPS cycling computers for a lot of people. That shouldn’t come … END_OF_DOCUMENT_TOKEN_TO_BE_REPLACED

Our wheel-expert Martin regularly puts two wheelsets in the spotlight to compare them to each other. This way you’ll get … END_OF_DOCUMENT_TOKEN_TO_BE_REPLACED

The Mavic Aksium, an entry-level wheelset from the French wheel builder Mavic. Renowned for its bombproof reliability, these are the … END_OF_DOCUMENT_TOKEN_TO_BE_REPLACED